How To Build A Strong Sales Team and Career: An Interview with Kyle Parrish, Head of Sales At Figma 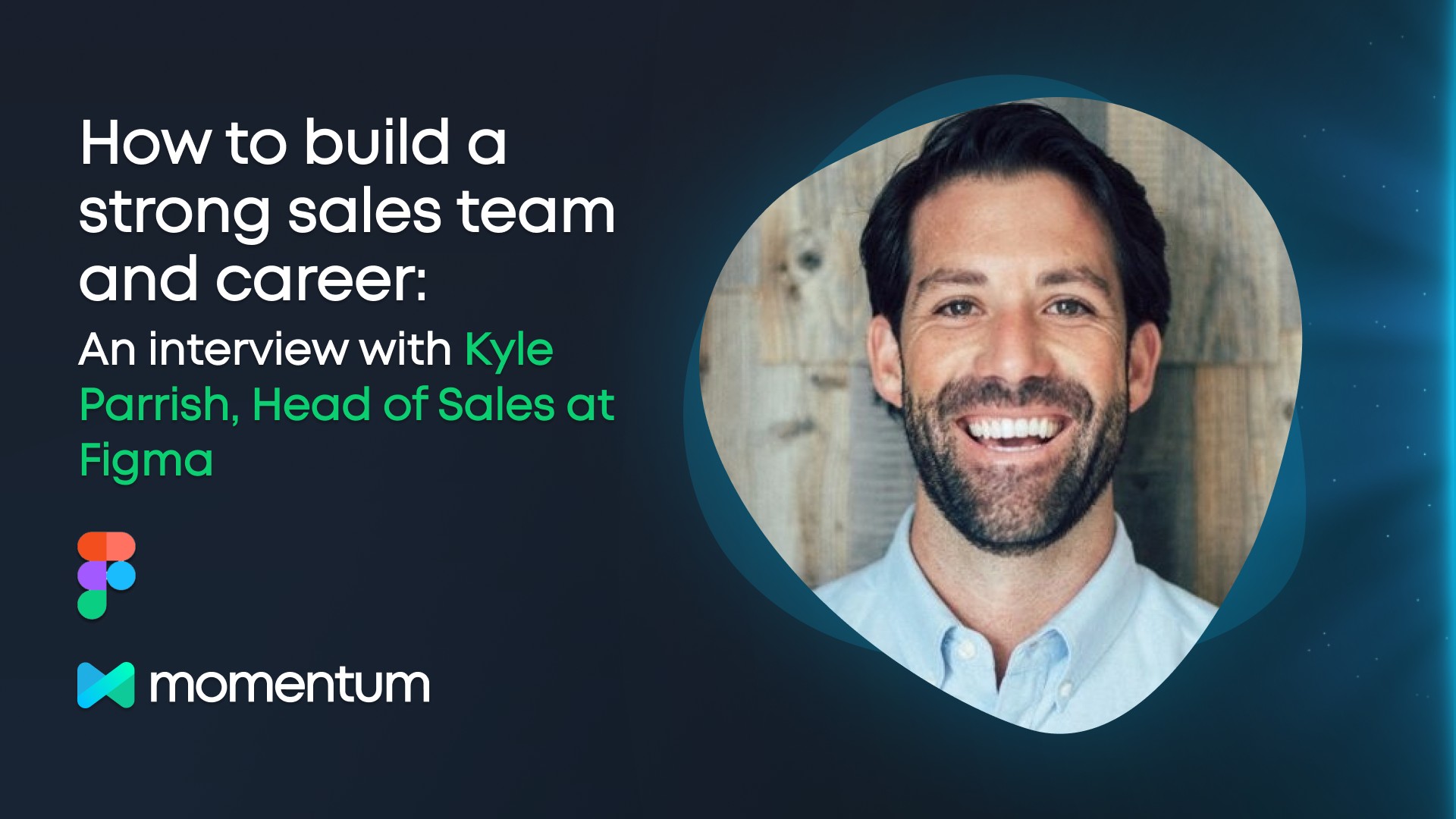 Kyle Parrish, a 6’4 finance undergrad, graduated into a tumbling economy with limited job prospects and perennial uncertainty. After a short backpacking stint across Asia, he settled into an Account Executive role at global payroll company, ADP, on a friend’s recommendation - combining his stellar number-crunching skills and natural extroversion.

”They had a great training program and were hiring in San Francisco so I flew up, interviewed, got the job, and moved in January of 2009 to San Francisco to start my career.”

After ADP, Kyle joined Dropbox’s Bay Area office in 2011 as an Account Executive and got promoted six months later to a managerial position. Promotions quickly followed - first to Head of Sales in 2013, then to Sales Manager for their Enterprise segment, leading teams across San Francisco, New York, and Austin. He took over as Global Partnerships lead less than a year later, tasked with business development and growing Dropbox’s partner ecosystem of providers, mobile operators, and online retailers.

During those years, Kyle’s biggest challenge was building a strong enough talent brand to convince people in Austin and New York - predominantly non-tech-heavy regions at the time - that there were non-software engineering jobs within the company.

”When we got to Austin back in 2013, the tech scene was not as prevalent as it is today. So people didn’t really think that there were sales jobs, marketing jobs, support jobs. They thought if you were to work at Dropbox, you must be a software engineer.”

In the same vein, sales is a vastly easier job when prospects already understand the problem you’re solving and how your product can help. In those days, selling cloud storage and collaboration software was easier in the Bay Area than on the East Coast or in the Mid West, simply because customers in San Francisco had been exposed to those concepts already. Customers, prospects, and potential sales hires in the Central/Midwest region weren’t following the company or keeping up with it, so Kyle and his team had to go back to first principles ad explain what Dropbox was and showcase the value of collaboration and cloud storage.

Kyle, now a father himself, comes from a family of giants - his father and uncle are both 6’8 and his grandfather was 6’10. His extroversion shows in his enthusiasm for New York’s direct corporate culture and tendency to prefer in-person meetings (pre-COVID) compared to West Coast culture.

”We would go up and down the subway and meet large enterprise customers and even commercial-sized companies. It’s just so fun and invigorating. When we won deals and customers, everything just felt like it was on a higher podium. Now at Figma, we have a New York office and I’m itching to get out there and meet some of the people I’ve never met.”

As Dropbox’s Global Partnerships Lead, Kyle worked on sell-through partnerships with global clients like Deutsche Telekom (owners of T-Mobile), helping to flesh out their B2B sales enablement programs and strengthen their B2C efforts.

They’d help them cross-sell, expand, and sell Dropbox to customers in their native language. It was an opportunity for Kyle to learn, expand his scope, and meet amazing people internally and externally.

Should you take a career break in sales?

Absolutely. Not enough people take breaks from work, but Kyle bucked that trend with a year-long sabbatical he took with his wife after he left Dropbox - roughly 7 years into his career. They traveled across Europe, Oceania, and South America.

”We met people from all these backgrounds and cultures all over the world and it was incredible. It opens up your heart and mind and you get to slow down [your pace of life]. The world’s an incredible place and people welcome you with open hearts and let you into their homes.”

Key role of a sales manager in an early-stage startup

Fresh from the much-needed break, Kyle took on a brief role as Head of Sales at atSpoke, a service ticketing company that was recently acquired by Okta. In July 2018, he stepped up to the top sales job at Figma, the design platform company currently serving over 4MM users across the globe. His early tasks - as expected at a startup - involved putting out fires in different areas such as sales ops, strategy, finance, leadership, and enablement.

”You have to do a little bit of everything. When you [become] a larger company and you hit those growth periods, [that’s] when you bring in people who are way better at those things than you are.”

”What I really sell the most is working at Figma: telling my story, telling the growth strategy, telling what I see on the horizon in terms of opportunity for the business.”

As with other sales professionals, COVID-19 was a blessing and a curse. It reduced meetings and induced faster ways of doing business that allowed for more time with family, but it also negated live interactions and much of the camaraderie that comes with that.

”If you thrive and get joy being around others, that doesn’t happen over Zoom. Remote’s been amazing and I’m excited to see what it looks like in a hybrid environment, but many sales organizations are just deficient of that energy.”

Kyle advises sales teams to track metrics like pipeline activity, progression rates, and win/close rates. Pipeline activity requires a steady stream of inbound leads, but at what rate are these deals progressing through? Are your response times to new leads fast enough? Are your sales pros hitting blockers that need to be removed? Are your top reps maintaining a consistent average time in the sales cycle? These questions - plus the right tools - ensure a more efficient enterprise sales cycle.

”With Chorus, which we’re customers of, and Gong and these other tools, you get that insight at scale. I can be in meetings all day long and go and watch these recorded calls and see how people are performing, and draw dotted lines to what we’re seeing in the win rates - which I think is game-changing.”

The importance of feedback in the sales process

It’s one thing to build a culture of open feedback at your company, but quite another for people to live that ethos. Remote working has limited the number of opportunities that sales professionals have to interact with each other and give feedback where necessary, and the dynamics of managing upwards make this even harder.

”You have to go and tell people that those [feedback] channels exist - and make sure people know you want to hear that feedback and [that] you’re acting on [it]. I’ve put a monthly feedback block on my calendar so people can grab time and share their thoughts, whether they want to come in a group [or] individually.”

Different tools power the sales process at Figma, and Kyle shares a few tools that his team uses daily. These include:

How to set up a sales deal desk: Lessons from Figma

A deal desk is the main point of contact for enterprise B2B clients in the deal structuring phase, and Figma’s deal desk involves representatives from legal, finance, accounting, and the executive team. This collaboration helps sales teams gauge what’s possible with each new deal, as some of Figma’s standard terms - like their “no discounts” rule - might call for a creative balancing of cost vs. value for each deal.

”We’re regimented and principled in terms of the types of deals we do and where we give levers. It’s been fun to collaborate with and help educate the executive team on how the sales team is thinking about pricing, packaging, commercial terms, etc.”

How to get hired into Figma’s sales team

Kyle’s hiring style prioritizes two key traits: aptitude and direction. He looks for curiosity in candidates - a willingness to learn how to solve unknown problems, regardless of how much experience they have. He also looks for career moves that have intention behind them - a thoughtful path from one job to the next. He acknowledges that pandemic-related job losses and transitions might skew that outlook for many CVs.

”Many people have great explanations for taking time off, and that’s great - but if there’s not a lot of intentionality and purpose behind what you’ve been doing over the past X years, it’s something you want to dig into.”

The importance of focus in your startup’s journey

Running your life is similar to running a startup. In both cases, you need to figure out The One Thing you’re not willing to fail or be mediocre at. You also need to recognize that you can’t do it all - that you’ll always need to prioritize your time and resources.

”Time is the thing we’re all short on. By being able to think through this framework of The One Thing, it’s made me feel okay with what I can’t do and not lose sleep over it - but really double down and be successful at the one thing I’m trying to get right.”

Early-career sales professionals can easily get lost in the weeds of their day-to-day work, but Kyle cautions them to “focus on the bigger picture” and spend their energy nurturing the right relationships, expanding their network, and focus on learning and development.

”Cultivate a strong brand, build a great network, don’t burn any bridges, and realize that the tech industry is much smaller than it seems. You will see your colleagues, your partners, your bosses, the people that you manage at those next companies.”

Befriend lots of people and don’t piss anyone off. That’s good advice we can get behind.