Should your deal desk function be client-facing? Pros and cons 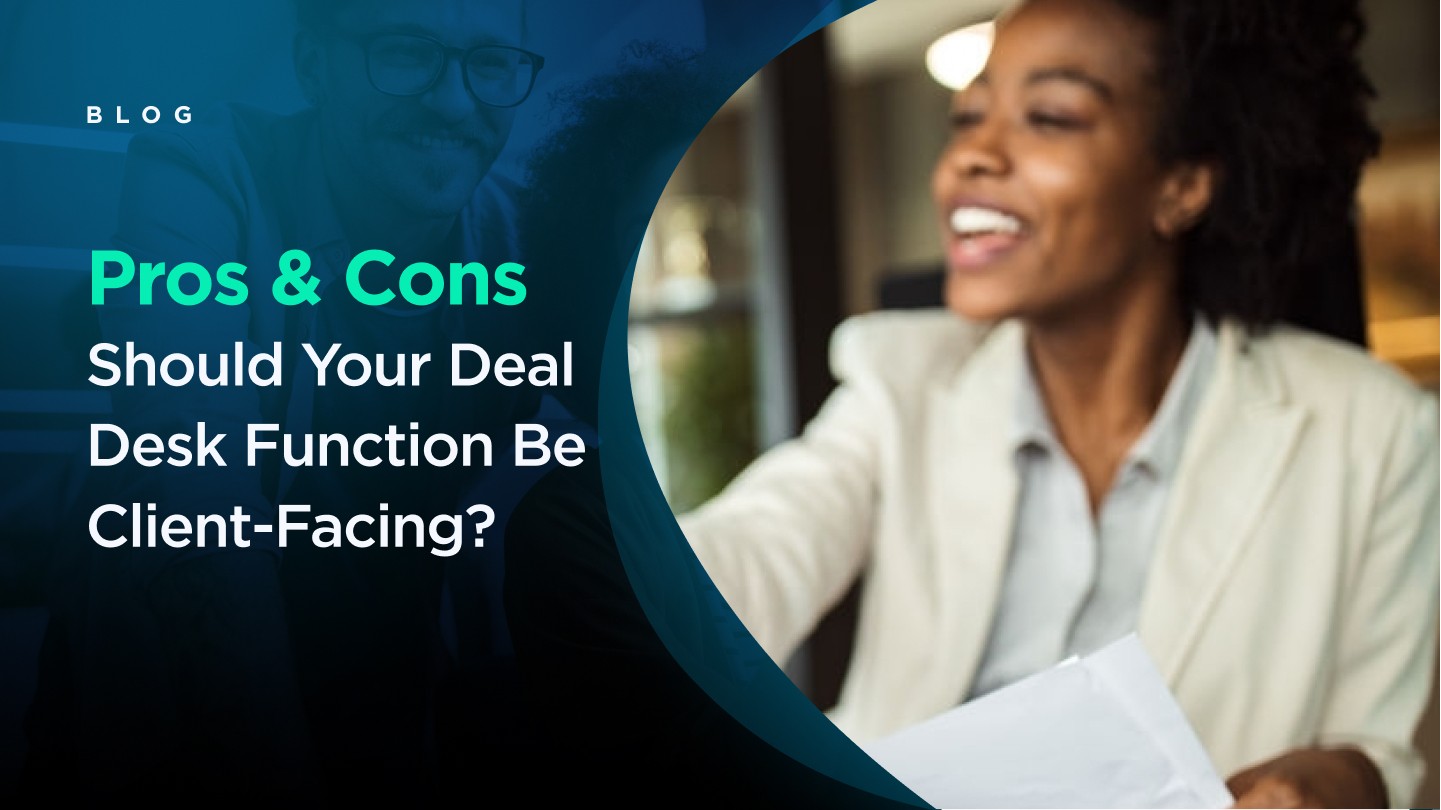 There’s an argument to be made for whether the deal desk function should be shielded from client interactions or whether it should be primarily client-facing. Deal desk teams all over the world have their own preferences, but which one is actually better for your team?

We’ve got our own thoughts on this topic, but let’s first understand the different dynamics to consider for your deal desk team.

When your deal desk isn’t directly client-facing (i.e., it runs through Sales), then your deal desk analysts are freer to work on the meat and bones of each deal: performing background research on deals in a given territory, gathering quotes and pricing, sourcing approvals internally, and reporting. This means greater focus to do what they do best while letting Sales handle client interactions and feedback alignment with your team.

The obvious downside, of course, is that the game of Telephone can potentially reduce communication effectiveness among all parties. Because there is an extra layer of communication from what the client wants to what the deal desk puts together, things can get lost in translation, leading to longer deal-closing times and the need for multiple contract amendments. There’s also a chance of the client feeling disconnected from the entire process since they have to work through multiple teams to get their message across.

On the flip side, a client-facing deal desk team can directly interface with the customer to understand their thoughts behind deal requests, their internal needs and preferences regarding your solution, and their immediate feedback on pricing changes, discounts, and other sweeteners you may offer them. This means deals can progress faster and with fewer communication hiccups.

Furthermore, because your deal desk team is directly interacting with the client, they can pick up new learnings faster that get applied to subsequent deals, reducing the need for lengthy debriefing sessions or further training down the line. The training gets built into the process itself.

This skill transfer lets your deal desk analysts and managers level up faster, deliver more value, and improve your ability to weather periods of increased activity. Over the long term, you’ll gain the ability to promote from the deal desk into other parts of the organization, thanks to their increased knowledge of customer dynamics and internal processes.

On the downside, the additional requirement to interface directly with the client means that deal desk professionals require training in client communication and negotiation skills, which your Sales team naturally already has. It also takes time away from other core aspects of their role, such as configuring quotes and pricing and amending contracts internally. In short, their workload goes up, and there’s a higher chance to drop the ball.

The former. We’re staunch believers that complex, non-standard deals progress much faster when the teams involved interface directly with each other. It’s the reason we built Momentum in the first place - to create a central place where deal desk teams can interact directly with clients through Slack.

How to set up a client-facing deal desk using Momentum

Momentum is uniquely built to handle the rigors of complex, non-standard deals in a streamlined way. Below is our formula for maximizing the value you get out of your client-facing deal desk team when using Momentum.

Know who is responsible for what

Define the key roles in your deal desk team so that everyone understands who is running point on which deal, who is responsible for pricing and quotes, who will need to provide approvals internally, and so on. These role definitions help deals progress faster and minimize friction for the client.

Momentum allows you to create dedicated Slack channels for each deal, consisting only of the people necessary to that deal (including the client). This feature minimizes crosstalk and allows for easier-to-track communication for all parties involved. See how Deal Rooms work here.

As an enabling tool for your deal desk operations, Momentum comes with numerous shortcuts to make your life easier. From syncing data to Salesforce to updating your team on deal movements, the keyboard shortcuts will quickly become a part of your deal desk workflow - allowing you to close deals faster like a pro.

While the benefits of siloed activities might seem ideal in the short term, they ultimately hamper your ability to move nimbly and close deals quickly in the long term. Orienting your deal desk team towards a client-facing model helps your team to nail client requirements more clearly, configure pricing and contract clauses faster, and move more quickly towards a standardized model of deal desk operations.

Continue reading our blog to learn how Momentum has helped teams like Miro and Honeycomb to manage complex deals.