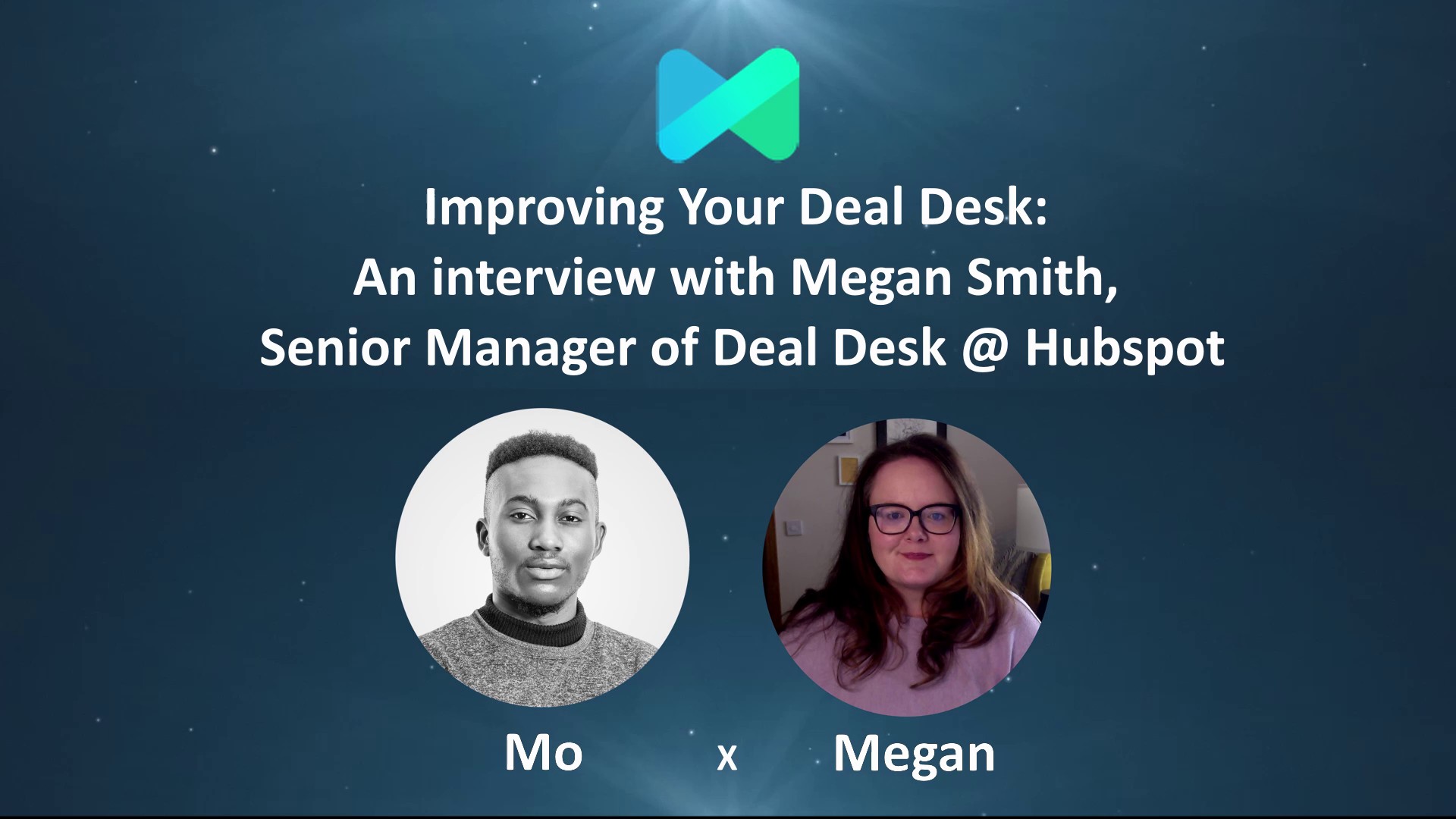 Megan Smith, Senior Manager of Deal Desk at Hubspot, shares her thoughts on what makes a good deal desk, what she looks for in new hires, and her best productivity tip.

Megan Smith really hates math.
It’s no surprise, really – she always wanted to be a journalist growing up. Today, that aversion to math seems a bit ironic for a woman who structures major enterprise sales deals across the globe.

A career in sales

Based in Dublin, Ireland, Megan Smith began her career at 16 working odd jobs in finance companies. She joined Google at a pivotal moment in her career, having just completed a Master’s degree in Military History and unsure which direction she wanted her career to take. She eventually set her sights on the business world, leaving her data entry role at Google to join LinkedIn’s Ireland office as a Sales and Order Administrator. Four years later, she was supervising their Global Accounts and LinkedIn Learning sales processes.

She credits LinkedIn’s culture of growth and improvement with shaping her approach to leadership and team management. This was key for someone who held lots of 1-on-1s with her direct reports and was responsible for their professional growth.

“Someone I worked with on a cross-functional team reached out to say that they had recently undergone a career pivot and that they were so grateful and appreciative of the support I had given them. I had made an off-the-cuff comment to them that, “You have to just find your joy and chase it until you get there.” And it was something I don’t even remember saying to that person, but to have that impact is probably the biggest compliment I’ve had professionally in my career.”

After LinkedIn, Dropbox beckoned – starting her out in a Deal Strategy role and moving her up the ranks to Global Head of Deal Strategy, a position she held for close to two years before joining HubSpot as a Deal Desk Senior Manager. Her career has seen her attaining many ‘firsts’ – from being the first EMEA deal desk hire at Dropbox to being the first global deal desk hire at HubSpot.

“Being the first comes with unique challenges. There’s not a huge amount of support [and] you’re doing things for the first time. The good news is, you’re not following in anyone’s footsteps and no one’s comparing you. There’s also that kind of constant, “Is this the right thing? Are we doing this the best way possible?””

The transition to HubSpot wasn’t an easy one, as Megan needed to adjust to a bigger company, a fresh playbook, and new relationships to forge. Her current role at HubSpot sees her working on deal strategy: defining metrics and engagement models, doing market research, etc.; and helping salespeople close cloud deals.

With just one direct report as of writing, her small team is growing and they’re hiring across the East Coast and EMEA later this year. Megan also believes that deal desks should include a resource to respond to RFIs and RFPs, and that enablement is a core function of any deal desk, helping to train and onboard salespeople. She’s decidedly building a proactive deal desk to bolster the sales team at HubSpot.

“It’s always been my dream to run a proactive Deal Desk, a team that’s closely [partnered] with sales so that they’re not coming to us to put out fires, but [to] help them predict where the fires are going to start and put them out before they gain traction.”

Like most enterprise companies, HubSpot has a long list of tools in its sales tech stack – but Megan’s team makes use of Zoom, Gmail, and Slack for communications; their in-house HubSpot CRM to manage leads and contacts; Gong.io for revenue intelligence; and Crayon for competitive research.

Megan views deal desks as the first point of contact with a client before moving to internal discussions, where a company decides which stakeholders it needs to involve, which sweeteners it can bring to the table, and how to ensure a fair dollar amount per deal. In her time at various deal desks, she’s found the biggest problem to be standardization, as clients often have custom needs and most deals can’t be easily replicated.

“What works for North America [or] LATAM is not going to work in EMEA or Japan. And there’s that kind of balance between standardization to move forward and move forward efficiently, versus having to adapt to the cultural way of doing business, or different expectations in different markets.”

These goals compete against trends in deal desk management such as the increasing need to do more with less, the push towards automation and remote working, and the ever-pressing need for innovation.

On culture, hiring, and productivity

HubSpot espouses a culture of empathy and heart – solving for the customer and taking care of staff. This culture drew Megan to the company, and she revels in the much-needed breaks that come from the company’s initiatives such as their ‘Global Week of Rest’ and ‘No-Meetings Fridays.’

“I was a bit of a naysayer on [No Meeting Fridays] when I first started, but it is actually so helpful, and people do really respect it which is always key. Things like that have been tremendous for me as a new starter.”

When it comes to hiring, empathy tops the list of traits she looks for in a candidate.

"I can teach you anything, but I can’t teach you how to be empathetic. I can teach you any skill, any system, any process, but empathy is one of those things that you’ve either got or you don’t. And when people demonstrate empathy to me in an interview, they move instantly to the top of my list.”

Megan’s most helpful productivity tip involves the Pomelo Method (also known as the Pomodoro Technique), which sees you working in 25-minute intervals punctuated by 5-minute breaks. Pairing this technique with to-do lists has vastly improved her concentration.

“I find a to-do list at the start of the day is great. I get huge satisfaction [from] scratching things off my to-do list.”

Time management is something she thinks about often, especially within the context of cross-cultural communication. This was inspired by a book about working in a global world called “Culture Map,” by Erin Meyer – a book that all new HubSpot hires receive. There’s a chapter dedicated to global perceptions of time across different cultures and locales.

“If you work in the East Coast of America, and you’re five minutes late, chances are you’re on the phone to your boss going, “I’m late, I’m so sorry. I’m going to be another couple of minutes, do you want to reschedule?” But five minutes late is on time here [in Ireland]. And so it’s acting with empathy, and recognizing that just because it’s your experience or your culture doesn’t mean that it’s everyone’s culture.”

Like many professionals, Megan has battled imposter syndrome throughout her career. While she admits she’s now mastered her fear, she’d advise her younger self not to worry too much about what people thought of her.

“If I could go back in time, and give the nine-years-ago Megan a bit of advice, it would be, “Nobody knows you don’t know what you’re doing, so just take a deep breath and make the decision; people trust you.”