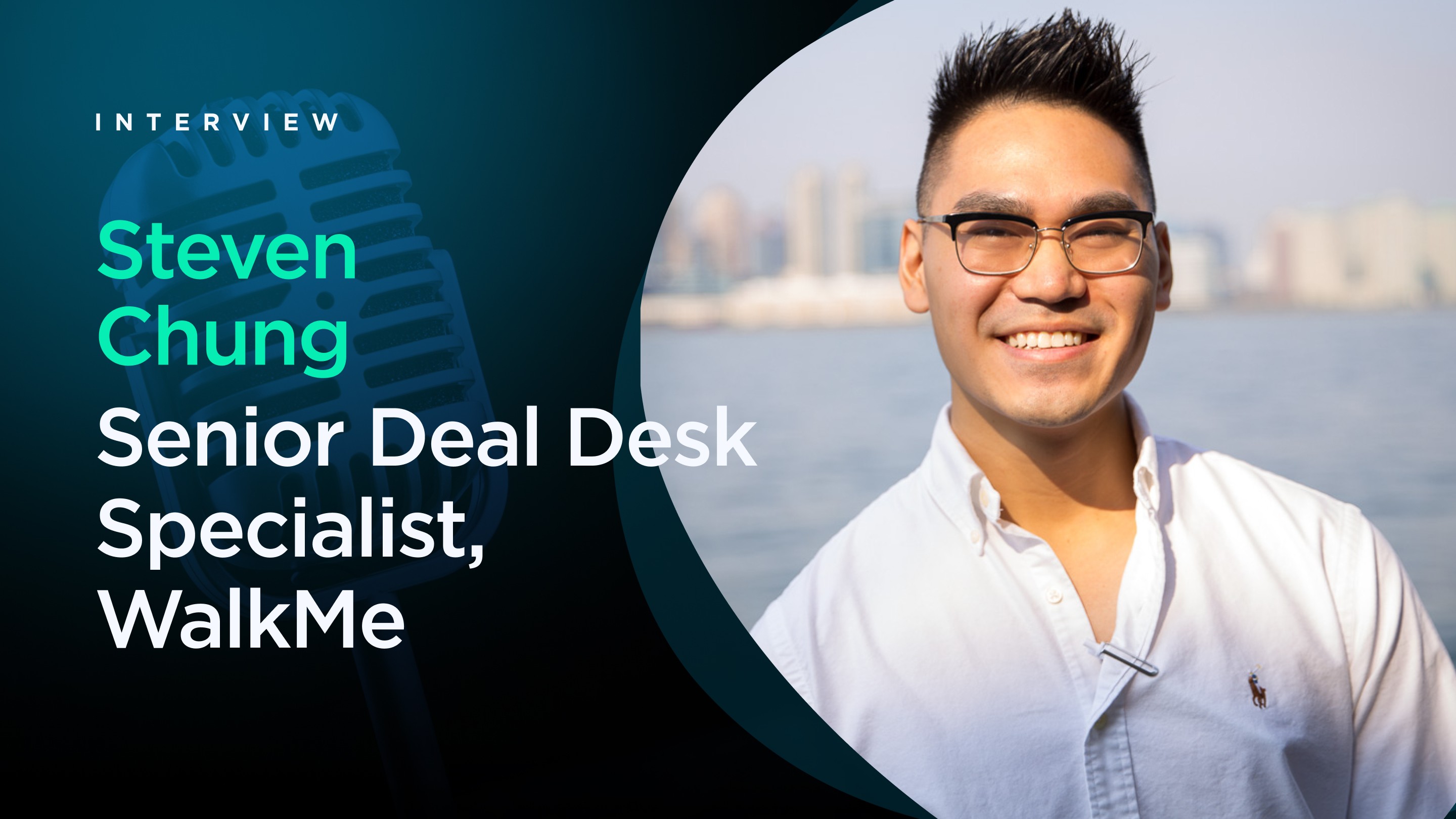 But Steve Chung, Senior Deal Desk Specialist at digital adoption platform WalkMe and founder of the Deal Desk Association, has thrived on making such lateral career transitions and bringing over different approaches to his work in sales.

WalkMe is software that overlays other software to help users learn how to use their companies’ systems and accelerate onboarding and adoption. It provides no-code, cloud-based, interactive online guidance.

One such approach involves how teams should think about customer success - from diagnosing a client’s problem and setting success goals to implementing the plan and evaluating results.

This approach, called ‘task-centered practice’ in social work circles, is one that Steve believes can significantly improve the sales qualification process for SDRs, AEs, and renewal managers looking to reduce churn and boost retention.

In his current deal desk role, Steve spends a lot of time preparing and merging order forms and booking deals. He’s had to manage expectations in those usually complicated processes, and he thinks a lot about simplifying those workflows to reduce errors and report the right performance metrics.

And sure, these metrics include the usual basket of KPIs: ticket volume, average initial response and resolution time, and deal rating. But there are three metrics that are especially important to Steve:

These three metrics correlate to increasing deal velocity, collecting revenue faster, and reducing errors in deal documentation. Optimizing these metrics can involve customizing deal clauses faster and more tightly to the client’s needs or scrutinizing invoices before sending them to the revenue team.

Ultimately, though, the type and presence of these metrics correlate to the relative maturity of the deal desk within the organization.

Steve, a confessed Instagram meme collector, has one deceptively simple tip for sales professionals looking to ramp up their productive output:

Know what’s not a priority.

In our fast-paced world, it’s pretty easy to pile on ever more tasks - more forms to complete, more calls to make, more meetings to attend, and more posts to share.

But as productivity experts have repeatedly stated, separating the urgent from the important is key to driving results that matter for yourself, your team, and your organization. Tools like the Eisenhower Matrix can help sales teams prioritize their tasks.

“The best productivity tip I can offer or share is being able to recognize when someone is prioritizing things that aren’t really priorities.” — SC

From lone wolf to team player: Looking back on an unconventional sales career

We all have things we wish we’d done differently earlier in our careers. For Steve, that would be not prioritizing more collaborative relationships through effective communication.

“In deal desk and even sales roles, you work with a lot of people, including complete strangers like prospects. So placing that greater emphasis (on fostering meaningful relationships) is a powerful, impactful thing to do.” — SC

Steve’s nickname in the social work world was “The Lone Wolf” - a nod to the required persona he often needed to get things done. As an independent contributor, much of his work involved enabling other teams and individuals to do their best work in supporting compromised populations.

That thread of support and enablement has only gotten more pronounced in his subsequent sales, deal desk, and revenue roles, even though these roles have now seen him evolve into more of a team player.

In the quest to attract and retain top talent, companies need to drive value-driven, growth-oriented, and inclusive cultures within their teams. This results in happier, more engaged, and more productive teams - and higher revenue growth.

“The one thing that resonates most is the professional growth associated with creating these meaningful and lasting relationships. This, in a sense, promotes diversity, equity, and inclusion.” — SC

Beyond work, Steve binges on podcasts - his favorite at the moment being the self-explanatory Business Breakdowns podcast by Colossus on Spotify, Apple Podcasts, and other streaming platforms.

It’s perhaps a fitting metaphor for Steve’s career trajectory - always seeking to understand new things at a fundamental level, apply them to real life, and grow in the process.

You can connect with Steve Chung on LinkedIn.