A lifetime in sales: The story of Mark Moore, customer data, and remote work 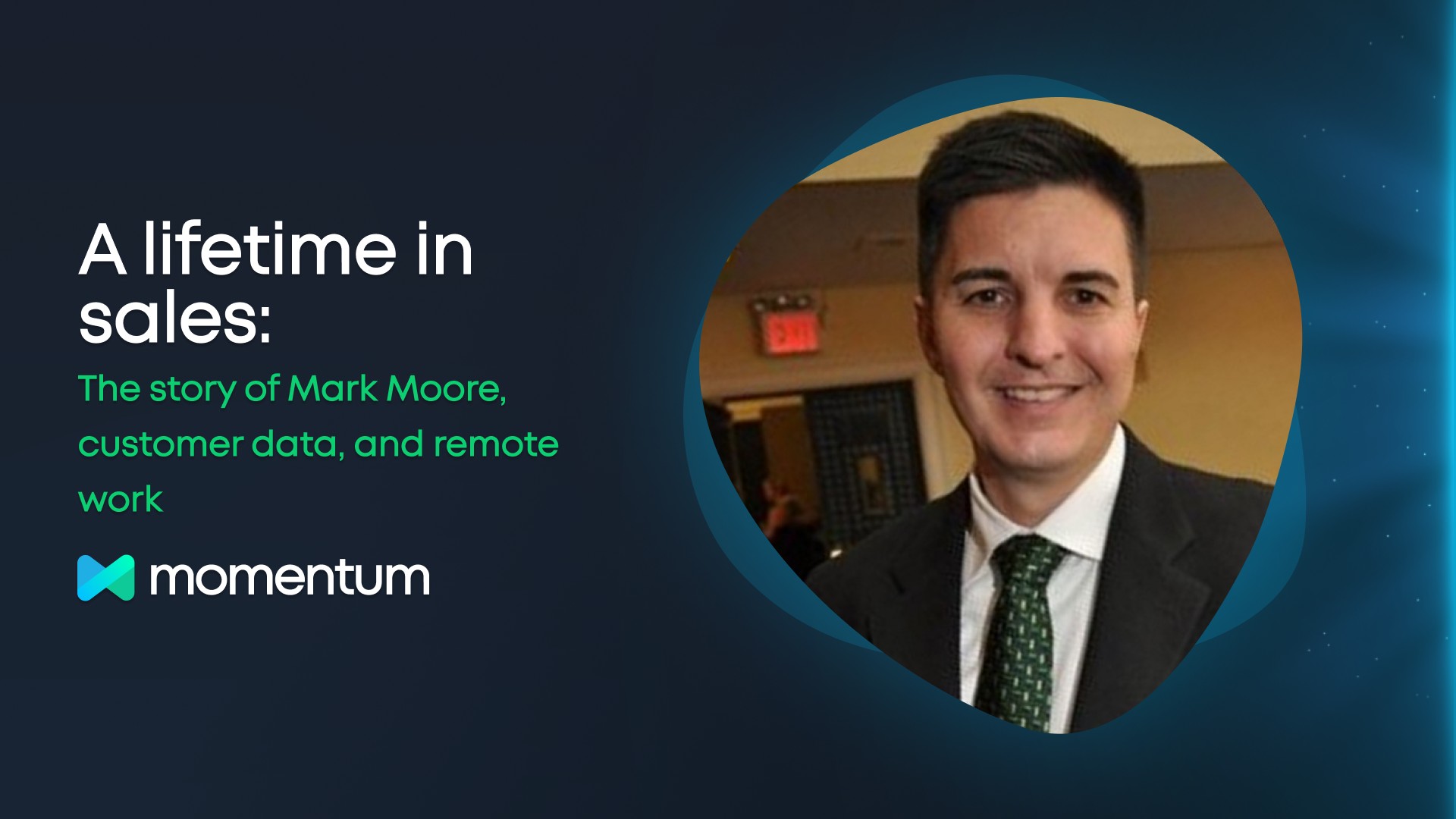 After 35 years in sales, Mark Moore has few regrets. A consummate salesman who’s been in deal desks since before they were called deal desks, Moore was frequently hired into newly created roles to lead sales and structure deals at different companies.

“When Workday was a startup, I was hired to help set up sales operations. I managed Salesforce, managed incentive plans, did the board deck — the whole gamut of sales operations. I’ve had jobs as broad as that, but my sweet spot is deals. That’s what I love to do.” — MM

Moore strongly believes that success in deal desks comes down to understanding your product’s capabilities and building deep relationships across the company. These relationships with Finance, Legal, and Product, among others, can be leveraged during deals to drive meaningful results.

He is now the Senior Director of Global Deal Desk at Treasure Data, a customer data platform that counts Mattel, Dentsu, and LG as clients. The company manages and consolidates large amounts of customer data and allows its users to leverage that data for intelligent marketing.

“We pull all sorts of disparate information from different sources and consolidate it, giving our customer a unified vision of who their customer is so they can act off that.” — MM

The company currently targets three main groups: marketers, sales teams, and customer service teams. Their CDP for marketing is their first offering, and it has proved to be a boon for marketers after helping the likes of AB-InBev and Subaru to unify and activate their customer data.

Lately, Treasure Data has turned its focus to customer service departments, rolling out their CDP for Service offering to call centers and related teams to enable real-time troubleshooting.

“CDP for Services would allow a call center agent to get real-time information on their customers — what they’re looking at on the website, what they have in their shopping carts, etc. It’ll be profound.” — MM

Treasure Data’s goal with this offering is to completely transform the call center experience for both agents and customers. The company has already bagged a few clients and boasts more in the pipeline. It is planning to repeat its optimized process for its next offering, a CDP for Sales, which provides data-driven recommendations and insights for faster close times, better closed-won rates, and lower acquisition costs.

And it’s not surprising to see why. In Moore’s own words, “there’s so much data out there,” and executives today want to get more insight into deals. Treasure Data uses that widely available data to be more predictive about existing and future customers.

“25 years ago, Sales Ops was a backward-looking organization that sliced and diced all the closed-won information. Sales operations and deal desks today are more forward-looking and help companies make intelligent decisions. It’s a completely different paradigm and a lot more fun.” — MM

Workflow efficiency boils down to the speed and reliability of the systems you put in place. At Treasure Data, Moore’s team is currently implementing the tools and systems that’ll help it initiate and close deals faster.

The company is primarily built on Salesforce and Marketo, among other tools. They’ve also implemented Momentum to speed up their deal workflow.

“We implemented Momentum about three, four months ago, went on Salesforce CPQ about three weeks ago, and are now implementing Ironclad CLM. We already moved a couple of workflows into production and are getting contracts. It’s been a crazy couple of months.” — MM

Treasure Data is onboarding new clients and growing their team quickly, with about 500 employees at the company and counting. That kind of growth is a good problem to have — because while it signifies increasing efficiency, targeting, and ROI from a systems and sales perspective, it also introduces teething pains that may strain the best of teams.

“The challenge we’ve had is growing from a small company to a mid-size company where we need more systems and automation in place. I was writing most order forms manually myself, and there’s no way we can scale doing that.” — MM

Automation frees sales teams to focus on higher-value work, and that’s where Momentum comes in. Where Moore struggled before with manually documenting approvals from critical stakeholders, Momentum now automates that process between Salesforce and Slack, which Moore and his team primarily work in.

“What I’m doing now is having my approval conversations in Slack, then I just archive them directly into Salesforce. I don’t have to worry anymore about documenting approvals because it’s all there.” — MM

Moore believes that automating such tasks is the key to unlocking massive productivity gains and redirecting vital resources toward other, more ‘white glove’ areas.

“There’s no reason why I have to route things for signatures. There are tools for that. Deal desk should focus on getting as much as can be done self-service so that time can be spent on the large complex deals that need a lot of handholding. I don’t want to have to do simple things.” — MM

Benefitting from COVID-19 with increased remote working, communication, and collaboration

But internally, Moore doesn’t feel that the pandemic affected his team much. Communication and collaboration were bolstered by Teams and Zoom, and Moore himself has never met his coworkers in person, even though he admits that building relationships in person makes a big difference.

“I came into a deal desk role thinking, “How am I going to function in a remote environment where I can’t walk over to the CFO’s office to capture approvals?” But it hasn’t been an issue. We are extremely collaborative.” — MM

“With the Softbank acquisition, we were communicated with on a biweekly basis. From prior experience, those things are usually held tightly at the senior executive level.” — MM

Like many companies, Treasure Data is currently evaluating the benefits of a fully remote vs. hybrid working environment. The company let its Silicon Valley lease lapse as it transitioned to a remote model, but is considering introducing more flexibility to the mix.

“What we’re going to do is be hybrid, where we’ll be flexible; we’ll be remote most days and pull people in as teams [where needed].” — MM

Should you hire more independent contributors?

Depending on where you fall along the spectrum, you might deeply enjoy managing people and teams — or you might prefer to contribute independently to your team’s output.

“I prefer being an individual contributor to being a boss. And when it comes to managing people, I like to have more of a mentoring position; hiring more senior people who can run their own tasks than me telling them how to do things.” — MM

Regardless of their personality types, one trait Moore expects from everyone on his team is being able to handle a curveball. This is especially critical in deal desks where situations evolve quickly and all team members need to understand the underlying need of each request.

Moore points to customer and team satisfaction as the ultimate north star by which to judge a deal desk’s performance. The team includes anyone who works on a deal, from the sales and sales ops teams to the legal and finance teams.

“It’s really about building relationships with the field, keeping clean deals, keeping them happy with the agreements we have, and building repeatable processes.” — MM

Looking back on a long career

So, after 35 years in sales, what could Moore have done more (or less) off?

Not much, as it turns out. Moore’s one regret was going on an eight-year sabbatical in the middle of his career — a move that worked against him when he eventually tried to re-enter the workforce.

“In 2002 when the economy was bad, I quit my job and took an eight-year sabbatical. Now I wonder if that was such a smart thing to do. It was a hard thing to come back from.” — MM

Moore is now ready to retire, and he’s got his eyes set on a move to Colombia with his husband. As a fluent Spanish speaker, he hopes to travel around Europe for a year before settling in South America.

“If I get really bored, I’ll open an ice cream company in Colombia. It’s a lovely country with lovely people and it would be fun.” — MM

Got thoughts, questions, or comments? Catch up with Mark Moore on LinkedIn!